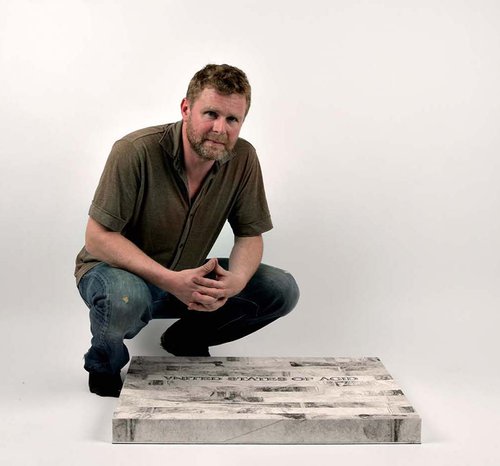 DIDIER MUTEL has been producing artists’ books and engravings since 1989. Born in 1971, he entered the École Estienne at 15, then studied at the École nationale supérieure des Arts Décoratifs in Paris, and continued his studies at the l’Atelier National de Création Typographique à l’Imprimerie Nationale. From 1997 to 1999, Didier Mutel was in residence at the Villa Medici in Rome where he produced two collaborative books. In 2008, Pierre Lallier transfered the Atelier Georges Leblanc, and a significant portion of the historical equipment, to Didier Mutel, and in 2009, the studio moved to Orchamps in the Jura. Since 2003 Mutel has been teaching at the Institut Supérieur des Beaux Arts of Besançon and is regularly invited by American universities for presentations and special courses. ATELIER DIDIER MUTEL is a Member of the Grands Ateliers de France, and in 2013 Didier Mutel received the prestigious title of Maître d’art. Most recently, he was awarded the Prix Liliane Bettencourt pour l’Intelligence de la Main, a juried prize for “exceptional talent” that recognized his latest book, R217A (2016), as a work “resulting from a perfect mastery of techniques and savoir-faire of artistic craft” as well as demonstrating “innovation, and contributing to the evolution of this knowledge.”

Founded in 1793, ATELIER DIDIER MUTEL is the oldest etching studio in France. From a historical and artistic point of view it represents centuries of knowledge and a very high level of handcraft production. The studio is well recognized in France and abroad, and is highly specialized in traditional etching and printing processes, from conceptualization through to final execution. Through very specific projects the workshop combines traditional techniques and skills with contemporary methods of design and printing. The aim is to reopen the artistic field of etching and to carry on very challenging projects. Didier Mutel apprenticed to the studio in 1988, joining his master Pierre Lallier who ran it from 1968 to 2008. The studio moved from Paris to the Jura and after 5 years of renovation; its grand opening took place in 2014.

The Rosetta Stone for Mutel’s Poetics of Acid Etching.

Melencholia II, III, IV (2021) by Didier Mutel and Nicolas Bardey, is a collaborative response to Melencholia I (1514), a copperplate engraving by the German artist Albrecht Dürer, which they present here in a series that combines engraving and serigraphy.

The Birds of Acid

The Birds of Acid is a response to John J. Audubon’s extraordinary Birds of America. In this work Didier Mutel reinterprets, in his own way, this monument in the history of engraving and printmaking.