The Birds of Acid

The Birds of Acid is a response to John J. Audubon’s extraordinary Birds of America. In this work Didier Mutel reinterprets, in his own way, this monument in the history of engraving and printmaking. 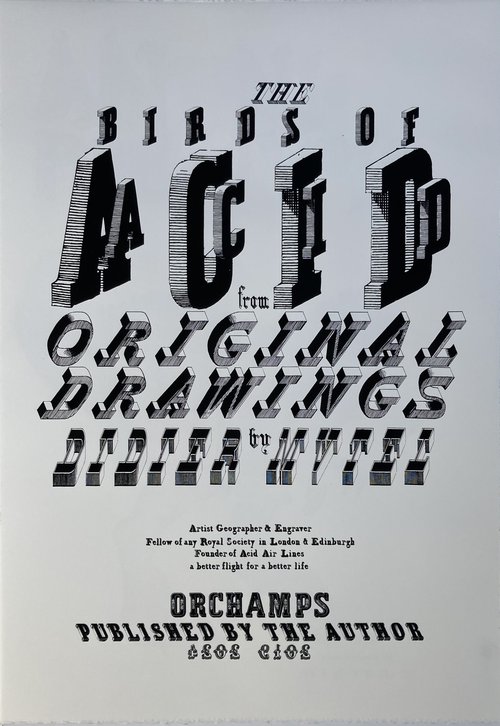 The sheet size for The Birds of Acid is approximately the same as Audubon’s original: double elephant folio (66 x 96 cm) is closest to the French Colombier sheet (62 x 93cm), paper formats differing slightly between France and England / America.

The title page is a spectacular pastiche of the original, in which Mutel has altered a few words: America becomes Acid—acid being the key engraving tool of the Atelier Didier Mutel, but broadly conceived as the metaphor for creation. Also notable, in response to Audubon’s proud affirmation of membership in the Royal Society of London and Edinburgh, and others, Mutel, perhaps jealously, but honestly, adds a hopeful honorific for himself. Finally, Mutel identifies himself as an engraver, artist and geographer, but also as the founder of Acid Air Lines, a fictional carrier, whose motto is: A better flight for a better life.

But the title page also functions as an declaration of intentions, emphasizing an important structural element of this epic project: a direct rapport with an historically significant creation, but also a joyfully impertinent displacement of the original, an esthetic spectacle which celebrates its predecessor while also interrogating the function of mimetic representation.

If we look at Mutel’s work retrospectively, birds have always been important to the artist. When he received his first diploma in 1991, his final presentation, a portfolio of 40 engraved sketches, and a series of 12 large etchings, as well as his second artist book was Oiseaux, poems by Saint John Perse (1991). Later on he published a version of Wallace Stevens’s “thirteen way of looking at a blackbird” (1997). Thus, oiseaux—or Birds—have been a frequent presence in his work for nearly 30 years.

Oiseaux, which can fly, can ascend from the earth toward the sky, metaphorically linking the earth and sky, are for Mutel, similar to artists and their books: they deliver our imagination to greater heights. According to the artist himself: “The sky is «le lieu merveilleux», «le ciel est une liberté» en opposition à la terre, lieu de contraintes. The sky is the perfect geography for the most wonderful journey.”

Livraison no. 1: the title page, printed in black, inaugurates a series of 5 extremely colorful prints, and provides a strong contrast to the brightly fluorescents plates which follow. The five first prints depict dinosaurs,* each named for an artist, each of them a member of the pantheon of engravers. Mutel has previously referred to many of these artists in earlier productions such as his Rosetta Stone (2015), My Way II (2013), and also in his Atlas of the Vnited States of Acid (2018), and Mutel’s work has consistently maintained a strong relationship with other artists.

* The present scientific consensus is that birds are a group of theropod dinosaurs that originated during the Mesozoic Era.

In this first livraison the engravers represented are: Antonio Pollaiuolo, Charles Meryon, Jacques Callot, Edouard Manet, and Rembradnt van Rijn. Didier Mutel will publish this new series in livraisons or fascicules, just as Audubon did, with 3 sets of a mimimun of 6 plates each annually. Fantasy, liberty, and vivid color characterize these dinosaurs/birds/ artists as free-living-dynamic actors on a large open page. By associating artist-engravers with these extinct creatures, Mutel makes a literal and graphic response to the frequently encountered suggestion that engravers are the dinosaurs of the art world. Future five-plate sets will complete the initial part of this project, making dynamic contemporary reinterpretation of the Birds of America.

Limited edition of 50 copies: 49 regular copies and one deluxe copy with unique chromatic variations by the artist. Available in Orchamps, France or in Petaluma, CA, USA.

Oiseaux, which can fly, can ascend from the earth toward the sky, metaphorically linking the earth and sky, are for Mutel, similar to artists and their books: they deliver our imagination to greater heights. According to the artist himself:

Subscription Plan: The first 20 copies (nos. 2-21) of The Birds of Acid will be offered on a subscription basis in fascicules--once 20 subscribers have been reached, the subscription will close. Subscribers may terminate their commitment at any time. The remaining 29 copies (22-50) will be offered complete and bound at a noticeably greater price. One deluxe copy will also be available.