(65 x 42 cm). 73 plates: title page, 36 plates of text and 36 figures. Printed on Rives 270 grams. 42 copies signed and numbered by the artist. Housed in wooden case with the lid constructed from one of the woodblocks.

Text reproduced from Holbein’s Les simulachres de la mort, Lyon, 1538; and combining images from La Grande Danse macabre, 1728, which were based on the Basel 1531 edition. Mutel’s dance macabre depicts death visiting the wealthiest people on earth, based on the Forbes list of the world’s wealthiest people, c. 2009.

A recurring theme in Mutel’s work brings traditional and historical printing technology and motifs into the present moment. In this work, Mutel drew on the sixteenth century wood cuts, superimposing the world’s richest citizens next to the dancing skeletons of the dead. Unlike the personages in Holbein’s originals, Mutel’s characters are not tilling the earth or otherwise struggling with their daily existence, and death confronts them in leisurely pastimes such as skiing and surfing... 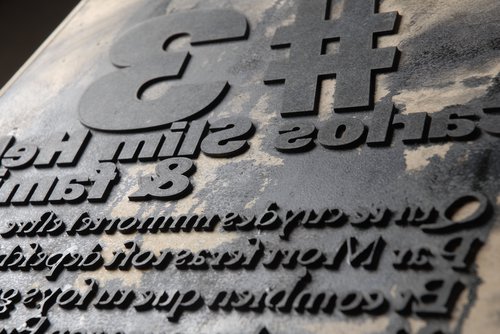 The large broadsides are housed in a wooden case, the cover of which is made from the printing surface used to produce the prints, laser cut after facsimiles of the 1538 text and Mutel’s enhancements.

The text associated with the images was borrowed from the 1538 Simulachres de la Mort. In each plate four lines of text serve as a reminder to each member of the Forbes list of the temporal aspect of existence: a memento mori addressed to the powerful. This text still today proves to be of prophetic force, suggestiveness, and dazzling clarity. The skeletal figures presented in this edition were taken from La Grande Danse macabre. These figures have been redesigned, transformed, and thus confronted with the gravity of a dramatic text, where death becomes jovial, cheerful, facetious, light, insolent, and provocative. From a moralizing death we pass to a futile death, uninhibited, pregnant with good times and indulging in leisure. Superhero death or death demystified, death taunting Bill Gates and Michael Bloomberg with surfing, Carlos Slim Helu with skiing, or skipping rope in front of Karl Albrecht...