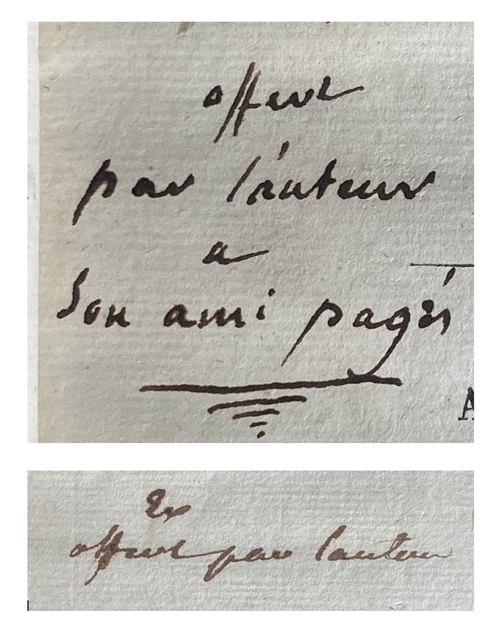 Jean Anthelme Brillat-Savarin (1755-1826), the author of the celebrated gastronomical treatise Physiologie du Goût (1826), was a lawyer, politician, chef, writer, judge, jurist, op-ed journalist, musician, and chevalier de la Légion d'honneur. Brillat-Savarin served in the Assemblée Nationale as a member of the Girondin during the revolution, but after the storming of the Tuileries, August 10, 1792, he fled to Switzerland, then London and eventually to the United States where he spent time in New York, Philadelphia, and Harford. By 1801 he was a counselor for the Court of Cassation, and had begun pursuing his passion for food, drink, and the sensations of the palate. The two works offered here are rare, curious, and inscribed by Brillat-Savarin.

First edition, printed in very few copies, at the author's own expense. The text lays out the criteria for an ideal judge or magistrate. Brillat-Savarin writes that, “the conditions of eligibility, although susceptible to some modification, according to country and system of government, can however relate to four principals: education, experience, age, wealth [les conditions d'éligibilité, quoique susceptibles de quelques modifications, suivant les pays et lés systèmes de Gouvernement peuvent cependant se rapporter à quatre principales : l'instruction, l'expérience, l'âge, la fortune]” (p. 7). The text then discusses each category in order. The present text does not have the spice of Physiologie du Goût, but it reveals the quality of the author’s precise capacity for analysis and the breadth of his intellect.

The pamphlet is largely an intellectual exercise, a provocative subject whose full treatment the author sidestepped in favor of other passions, namely those in the Physiologie du Goût (1826). The author, adviser to the Court of Cassation, lived as a gourmand, in quiet obscurity, publishing only a treatise on economics, Vues et projets d’économie politique, 1802, and an essay on dueling, the latter being bound with this title, before his fulsome treatment of the physiology of taste and the culinary arts.

The autograph inscribed on the title: “Exemplaire offert par l'auteur”, the same formulation as the copy at the BnF, suggests that this non-commercial book was likely distributed only to the author’s inner circle of colleagues and friends. An uncommon title by an uncommon author.

First edition of this rare title, held by fewer than a dozen US institutions. This publication, which appeared before the celebrated epicure’s the Physiologie du Goût (1826), dates to the period when Brillat-Savarin, who had become indifferent to political revolutions, was occupied with legal and judicial work. In this treatise more concerned with philosophy and history than jurisprudence, he examines the circumstances under which the participants in a duel may be punished by the laws of the time. In Brillat-Savarin’s view, duels provided a kind of check-and-balance toward respectable behavior in a civilized society, he argued that laws on dueling had no real effect on those who would choose to settle questions of honor with the blade, further asserting that it was the lack of subsequent royal decrees that led to fewer and fewer duels. With contemporary observations and an attorney’s insights, Brillat-Savarin offers readers a valuable eyewitness perspective on dueling at the end of the eighteenth century.